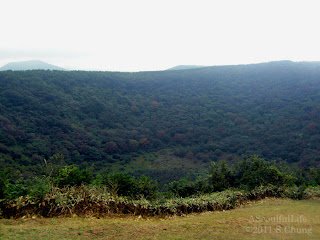 When you're a city bumpkin like me, being surrounded by nature and nature only is something to relish. The fact that you can breathe in air that smells of nature is itself a blessing. It's almost like medicine that takes away all the ills and strains that come from city life.

Jeju-do is abundant in untouched nature. I'll probably say this a million times over, but it is truly a beautiful island. Along with its numerous waterfalls, hills, caves, forests, and beaches, Jeju-do has volcanic craters here and there, among which Sangumburi (산굼부리) is the most famous. "Gumburi" means volcanic crater in Jeju-do dialect, and "san" is mountain. 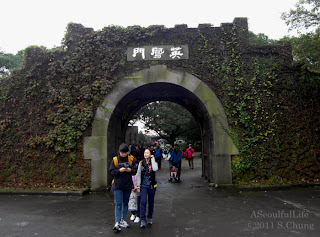 To reach the crater you first walk through Sangumburi park by passing the ivy covered "Glorious Phoenix Gate". 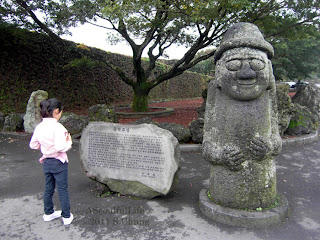 Next to the gate is Jeju-do's traditonal stone "harubang" (돌하르방). Harubang is the Jeju-do dialect meaning "grandfather". Although the exact origin of the harubang isn't well known, they were set up at village entrances and fortress gates to act as a totem to ward off evil spirits and protect the people. In the old days, it also acted as a symbol of fertility; women who would touch the harubang's nose would be able to get pregnant easily. Somehow along the way this legend changed and now it's commonly said that rubbing the harubang's nose would give you a son. 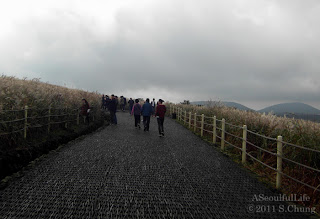 The path up to Sangumburi was breathtakingly beautiful. It was a grey day that added to the ambiance, with the hills in the background peeking through watercolor clouds. The reedlike plants called eoksae (억새, flamegrass) swayed in the breeze, creating soft waves of sight and sound. We took a picture, of course.
(Links to everyones' blogs are here.) 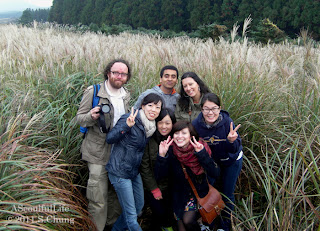 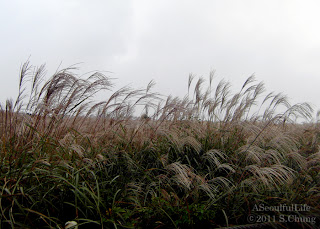 When you reach the top, you can look down into the crater that doesn't look like a crater at all, because of the foliage. It's like looking into a large sunken botanical garden. Photo from Korea.net's Flickr: 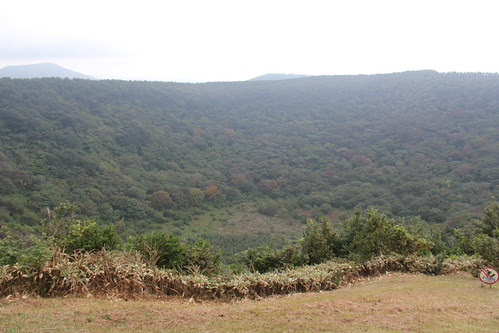 Also on the top of the hill is a deer statue: 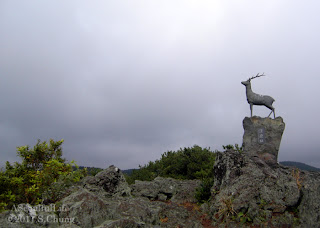 Legend says the Jade Emperor of the Heavens ruled all the sky and earth, all the stars and galaxy. It came about that a star named Hangam fell in love with the third daughter of the Jade Emperor, which was forbidden. The two met secretly but were soon discovered and were banished to live on earth. They descended upon Jeju-do's Hallasan (한라산), rich in wildlife and plants. However, while the Jade Emperor's daughter relied on the bounty of fruit and vegetables the mountain provided, Hangam enjoyed hunting game and feasting upon the results of his efforts. This created a divide between the lovers and they went their separate ways. The Jade Emperor's daughter settled near a village with a hackberry tree (currently situated near the South Gate of Jeju city) and Hangam settled in Sangumburi to look after the wild animals. The statue is a tribute to him and the animals of the area. 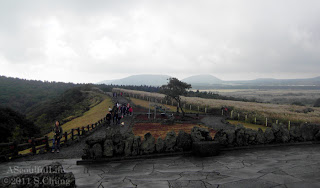 The walk down is as beautiful as it was on the way up. The park is quite large and taking your time is definitely worth it. You can also enjoy frolicking on the empty ground like Eleonora: 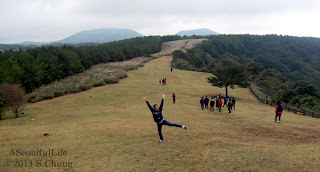 So much greenery! Having rained a bit, the fragrance of the trees and earth and flowers and plants were lingering delicously in the air. Alex and I kept on saying we wished we could bottle it and take it home with us. The "nature fragrance" room fresheners smell so chemical and fake. 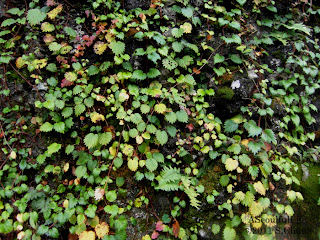 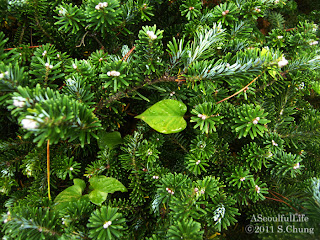 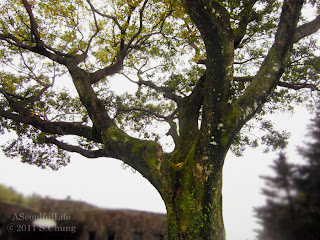 Me, being the dolly geek that I am, had brought along a Pinky Street figure to accompany me to enjoy the sights: 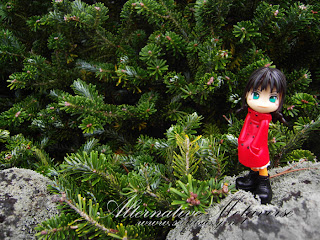 I also took a short video :

More of the Jeju trip to come.
And I know I've been blabbering about it all over the place, but it's the last day to vote for Jeju!

Email ThisBlogThis!Share to TwitterShare to FacebookShare to Pinterest
Labels: jejudo, korea blog, out of seoul

A Jeju-ful Weekend - Vote for Jeju!

I've been blogging all year long for the Korea Blog, the accompanying blog for Korea.net, the official site for the Republic of Korea. (Sounds rather heavy written down like that.) 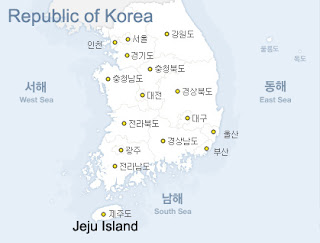 At the end of October, several of the Korea Blog's Worldwide Korea Bloggers and I had the chance to visit Jeju-do (Jeju Island), courtesy of KOCIS (Korean Culture and Information Service) who runs the websites.

Jeju-do was chosen as a finalist for the New 7 Wonders of the World (Nature) and our visiting the island matched the timing of the last few weeks of voting. 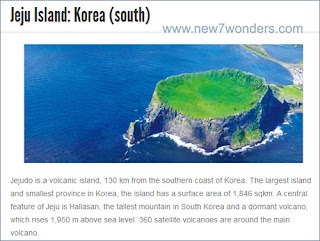 I've been to Jeju-do multiple times: on school trips, with family, with colleagues, with friends. However, every time I visit, I'm always amazed at the amount of things yet to see and experience. The scenery itself is breathtaking, the local food absolutely yummy, the tropical tinged air is crisp and clean, the lack of high-rise buildings give you such an ample view of sky your heart soars, and the surrounding ocean both lulls you and excites you depending on the season and weather. It's a beautiful, beautiful place. 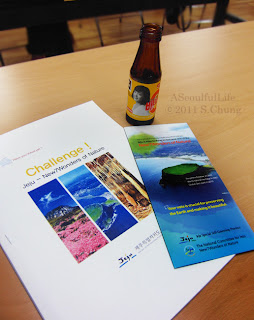 Upon our arrival, we were invited to the government office for a brief meeting about the efforts of Jeju-do for its quest to become one of the 7 Wonders. (I was very happy with the provided Vita 500 drink, by the way, because the members of SNSD are on it. I traded mine to get my favorite member Taeyeon. Heh.) Being Korean, I certainly know why Jeju-do should be selected as one and I'm quite sure that anyone who had the occasion to visit would know as well, but some of the reasons that were stated in the pamphlet were:
Jeju-do is a geopark. Dubbed a "volcanic museum", Jeju-do is an island covered with small hills and the large mountain Halla which are volcanic cones. Lava tubes are scattered around the island and the botanical sights are amazing to behold. Mountains, hills, beach, forest, caves, volcanic remnants - Jeju-do has them all. UNESCO has already designated Jeju-do as a Biosphere, Natural Heritage and Geopark.
The island has natural swag, I'm telling ya.

Getting Jeju-do selected would do wonders for the island; it's not only the honor, but also the very practical economic effect caused by the boom in tourism that results from the vote. 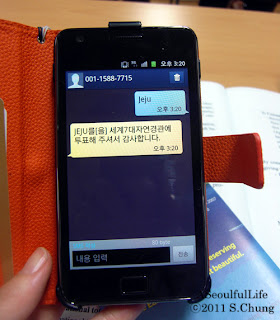 We all voted. And with Mr. Kang Seong Hoo, the government official who headed the informative meeting, we took an obligatory (well, in Korea at least) "Fighting!" photo. 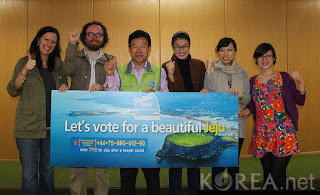 The bloggers who participated in this trip (not all in the photo above) and their blogs:

More to come. In the meantime, please vote for Jeju-do and also visit the Korea Blog.
http://blog.korea.net/

Email ThisBlogThis!Share to TwitterShare to FacebookShare to Pinterest
Labels: jejudo, korea blog, out of seoul

October 9th marks the 565 anniversary of the proclamation of Hangeul, the Korean alphabet. The major portal sites changed their logos accordingly for the occasion.

Naver has an animated logo going on - something which I don't know how to capture.

As does Nate and Yahoo! Korea.

And Google Korea opted for a simple logo in traditional tricolor.

I wrote a long post last year about Sejong Story, the museum at Gwanghwamun Plaza about King Sejong and the creation of Hangeul : here.

seoulsuzy
With the exception of several years of my early childhood in the States and a stint in Paris in my twenties, Seoul has been my heart and home. This city won't quit me.

(c)2008-2013 All rights reserved
Please do not take content from this blog without permission. Thank you.
On hiatus from 2013.